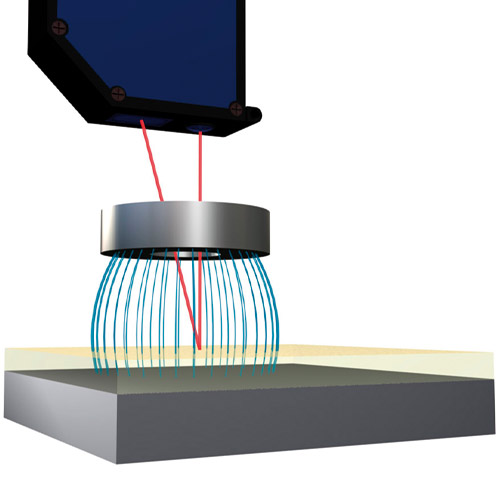 Layer thickness measurement belongs to the group of one-sided, non-contact thickness measurement. Basically, only the layer thickness of electrical insulators can be measured for opaque objects. An eddy current sensor penetrates the insulating layer without damage and measures the distance to a layer underneath it. At the same time, a second sensor, a laser triangulator measures the insulating layer. The layer thickness is obtained by offsetting both signals. This method of measuring with two sensors using different principles is called the dual sensor technique by Micro-Epsilon. A second possibility is the layer thickness measurement of transparent materials using confocal measurement technology. The emitted white light penetrates the measuring object and provides a peak in the signal graph at every material transition. For example, the film thickness between two glass panes can be easily measured in this way.